On Monday, the Cooper Union Occupation ended. Not by violent police intervention, nor by administrative caving to occupier demands. They walked out voluntarily, left the occupation after a week chained in on the 8th floor. To doubt the commitment of the eleven students who occupied is ridiculous: as anyone who has been in a hard occupation knows, it's boring as hell: stinky, tedious, and crazy-making. It's jail with friends, basically, and the smaller the space and the number of people, the harder it becomes. I have no criticism of their choosing to leave, and would like to reiterate that what they did was bad ass and that I have nothing but solidarity for them. 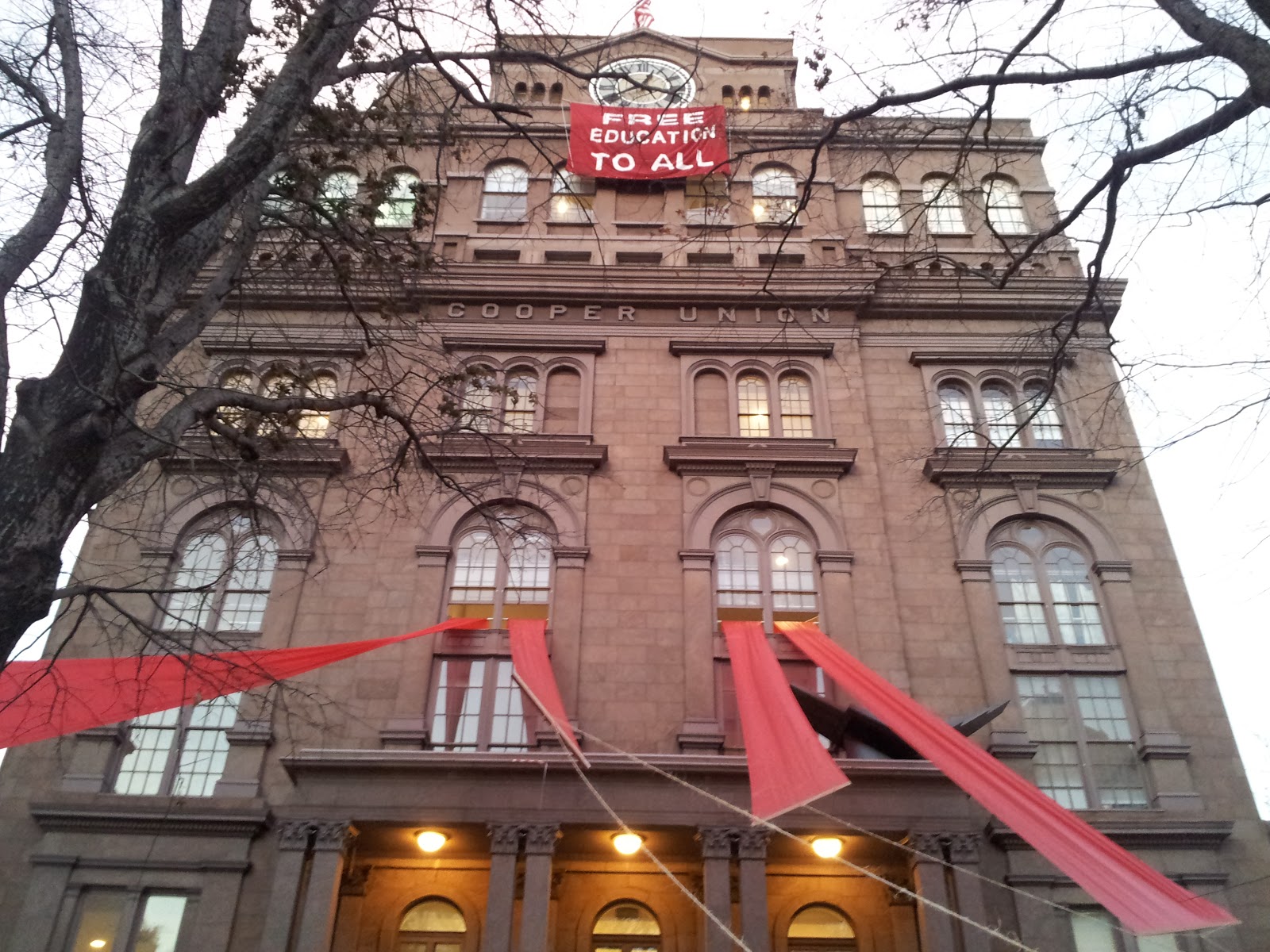 But the fact is, they did not win. And the point is to win, not to demonstrate that you're angry about losing. This largely had to do with a tactical move by the administration--ignore the occupation until it goes away--and the response by students outside (at the behest of the occupiers)--don't escalate, just show solidarity and support. When your enemy brings in the cops and kicks down the door, well, you can hope you've got some fight in you, or that the violence of their action will inspire massive solidarity. But when you're ignored, when the field is left to you alone, you can attack, and you have to attack. When they don't try to evict, or negotiate, or even make a schedule of eviction, you have to force them to respond. You want your power to be clear. You need to demonstrate the repercussions of the administration's decisions. You need to be a threat to business as usual.

Which is a shame, because Cooper Union was in a particularly vulnerable position. In the process of having their engineering program's accreditation evaluated, they could not afford a police incident, and NYPD were basically never there. On three occasions during the week over 100 people gathered outside in support: on Saturday there were probably 250. 100 people could have easily bumrushed the guards and taken over another floor of the building, one whose occupation the administration couldn't ignore. Not during finals.

There was something deeply apolitical about the occupation's framing from the beginning. Talks and manifestos were full of reference to Cooper Union exceptionalism and paeans to the school's Wall Street patriarch, Peter Cooper: speeches were given at rallies that could have come straight from a Cooper Union advertising brochure. People who weren't Cooper Union students were distrusted. The occupiers livestreamed with their faces clearly visible.

But the reformist nature of the discourse was in strong counterpoint to the radicality of the occupation itself: they were ready to chain themselves against the door if maintenance came, in order to make it impossible to cut through, they refused to negotiate with the administration, and they demanded that the president step down immediately and free tuition be installed permanently. And they weren't even doing it for themselves: they could not possibly face tuition, they were fighting for future students only. This gives me hope: seeing somewhat less politically sophisticated movements reach for some of the most radical and militant forms of action available in the playbook is new and awesome. But the weakness of the hard occupation as sole tactic was on clear display.

If you don't take over operationally vital space, if you don't constitute a real threat to the system you oppose, they can ignore you to death. How long have people been camping out in front of Trinity Church now? 8 months?

Escalation for its own sake is the worst kind of foolishness. But we need to begin thinking strategically about what power is, about what it means to build power. When there is an opening, we need to know how to take it, and, more importantly, we need to know that we have to. Occupying has begun to be understood as a primarily defensive tactic: the first moment is all offense (take the space), but then the game becomes hold as long as you can. What the Cooper Union administration demonstrated is that if your opponents choose not to fight, the best defense in the world wont do shit. You'll be bored to death, which is the whole strategy of this rotten, empty system to begin with.

This isn't to say the struggle at Cooper Union is over, or was a total loss. There were beautiful moments, tuition hasn't been instituted yet, and many of these students are just starting to realize the potentiality of their actions. But if we want to start winning struggles, we're going to need to learn to attack. A well defended occupation is not enough. We need to respond strategically and fluidly to the situations that arise, take every opportunity to expand the struggle (which is not the same thing as taking every opportunity to escalate), and begin really building power that goes beyond the expression of our displeasure.

We need to move beyond reacting (to the police, the banks, administrations or governments) and begin to start acting. Why build something just to defend it? We should be building occupations, groups and movements that can be immediately deployed to build bigger ones, even if it means risking their destruction.

Nothing that we build is worth saving at the cost of expanding our power beyond it.
at 12:26 AM